Time trend of Coronavirus Covid-19 outbreak in the world

This article reports the temporal trend of the COVID-19 outbreak in the world according to data released by the European Center for Disease Prevention and Control.

The European Center for Disease Prevention and Control (ECDC) agency publishes daily the data of the diffusion of the COVID-19 in the world.

Note. I have not checked the ECDC data for the other countries, but about Italy it reports data of the Italian Civil Protection, with a delay of 24 hours.

Below I report the graphics of the historical series of cumulative data obtained by processing data published by ECDC.

Note that these are overall data, as ECDC does not publish the number of healed, but, for every single day, only the number of new cases and deaths.

Consequently, adding the number of new cases day by day, it is possible to get only the total number of people affected by the virus.

From the ECDC data, I aggregate them about European Union Countries, then I calculate the 10 countries that have the bigger number of affected people. Below I indicate the time series of the daily totals for these ten countries, as of January 14, 2020. 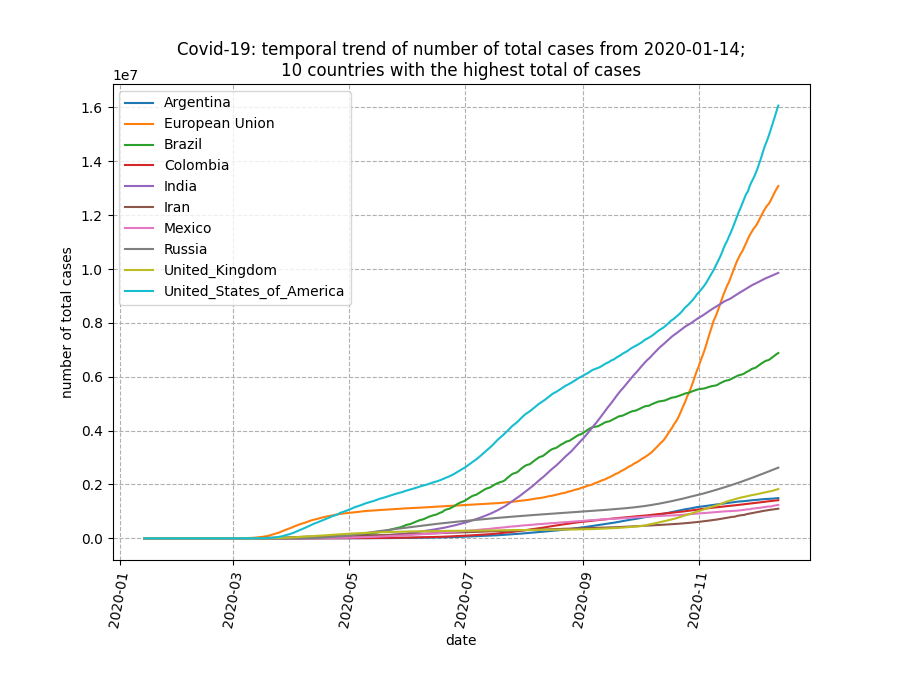 Instead, the following graph shows the trend of the overall cases, starting from February 20, 2020, eliminating the data of the two most affected countries. Thereby it is possible to better observe the trend in the latter period for the countries from the third to the tenth placed among those most affected by the virus. 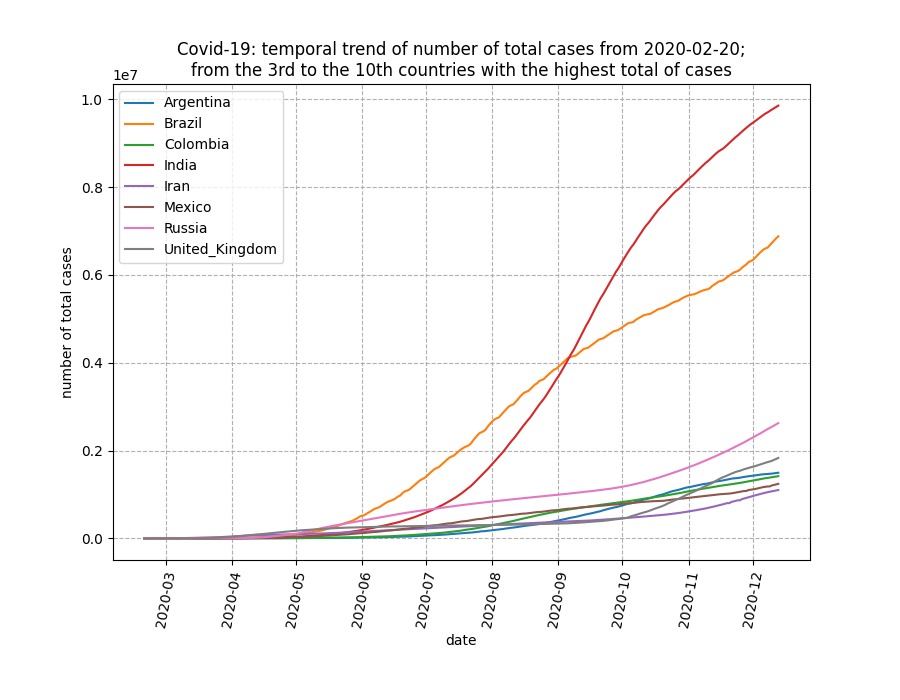 Finally, below, the situation for the 10 most affected countries member of the European Union. Again starting from 20 February 2020. 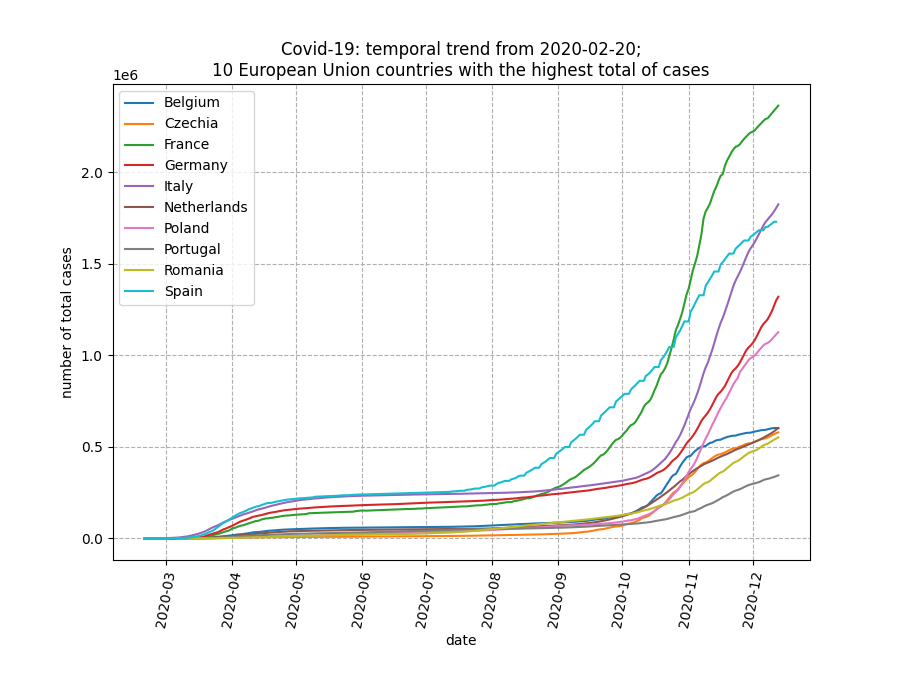 Hereafter a summary of the situation about the twenty most hitted countries at the update date of this article. Columns report:

In the first table, European Union Countries are bundled.

Instead, hereafter the European Union Countries are unbundled.

The most recent remarks precede those temporally more dated.

[June 23, 2020] It is with dismay and pain I observe the trends of contagions in the United States and Brazil. These countries are applying policies of outbreak containment very mild. And we observe the result at the relative curve of the total cases.

About the painful aspect of deaths. While I can think, to a certain point, the US health service may be more advanced than that of the European Union (which with fewer total cases: one million two hundred thousand, had had more deaths: over one hundred and thirty thousand), I struggle to accept the same consideration for the Brazilian health system. In this case I fear that many deaths take place outside hospitals and/or that in any case they are not diagnosed as due to COVID-19 infection.

Given the current behavior of these countries, to lessen the impacts on the economy they don't follow lockdown health policies, I'm afraid we'll see what it is going to be the effectiveness of the concept of herd immunity. I just hope the medicine will make rapid progress in developing appropriate care. Because if herd immunity will be achieved with 60% of the infected population (this was the hypothesis in Great Britain), considering the population of about 330 million people of US, we will reach 198 million total cases before to achieve herd immunity. And if the mortality will remain the current one (5.2% of total cases), the US would experience the appalling figure of around 10 million deaths.

And at this moment I am also worried about the situation in India, whose curve of the total cases get a polynomial trend with upward concavity. A sign that the lockdown policy is ineffective. Again here the percentage of deaths attributed to COVID-19 is much lower than that measured in the European Union. And even in this case I don't think the health service is better of EU health service. Furthermore, here we are talking about one billion and three hundred million people. The global impact as loss of life would be tremendous.

[April 15, 2020] In Europe we observe that the curves of the total cases of Spain and Italy begin to flatten out. This is indicative of the fact that in these two nations the epidemic begins to slow down. Even Germany shows the same trend, while there seem to be uncertainties about efficacy of containment measures in France. In fact, we observed in this country a clear improvement a few days ago; improvement now frustrated by a decided increase in the slope of the relative curve.

Overall, the European Union shows a slight slowdown in diffusion of the virus. Instead, I still don't see clear signs of slowing down in the United States.

More than ever, I find Trump's policy schizophrenic. On the one hand, it accuses WHO of not having effectively warned of the extension of the outbreak, and withdraws American funds from it. On the other side presses to resume work, when the epidemic is still fully underway. What would he do with the warnings of WHO (which were issued a lot), if he still ignore them?

[March 31, 2020] The speed with the US total case curve has soared is astounding. It seems the neglect with which the US (not) faced the problem has brooded the epidemic without detecting its presence for a long period of time. Unfortunately, now there are consequences. Fortunately, at least for now, with a low percentage of deaths.

The total number of cases in France has exceeded that of IRAN. The latter it is seeing a certain increase in infections, although not at the rate of the main ones European countries: Italy, Spain, Germany, and France.

Unfortunately, all deaths/cases ratios are worsening. Italy has exceeded 11%, Spagna is over 8%. IRAN and France also exceeded 6%. Only Germany has a percentage lower than 1%: I hope they manage to keep it constant.

[March 26, 2020] I added a table with summarizing data at the update date. This table has a column showing the ratio between deaths and total number of positive cases.

The numbers in this column are conflicting. We have a mortality of 9.8% in Italy, 4% in China and 1.4% in USA. Without mentioning 0.3% of Australia or Germany or Norway.

These gaps are excessive for health systems that are qualitatively comparable. Even if you want to account for Italy an excess of the population in old age. I am convinced that here we have different data census criteria. Both for define the positivity to the disease, which for the cause of death.

And I am convinced that the first thing to do is to impose a standard of behavior among all nations. Otherwise monitoring does not make sense: what has been done in a country cannot be analyzed and compared with what made in another country. For example, I insist, look at the curve of total cases of Iran; which for me is a big question mark.

This pandemic has made it clear more than ever that "the whole world is a village". This old proverb wants to highlight as certain behaviors are observable in all people. But now it can mean literally: travel for pleasure or work weave a spider web that envelops all humanity in the world.

Warning, I'm not saying it's fault of China, or that one should not trade with it. I am convinced that one new epidemic could have developed in any other country in the world. And if this country had been industrially active (examples: Germany, France, USA, Brazil, UK, Italy, ...) then would be happened exactly what we are experiencing now: from the country in question (nation zero :-) would have spread to an industrial partner (nation one ...) and then from here spread to the rest of the world.

So what must we do? Must we stop the trips, and bring the world back to a Middle Ages made of feuds whose borders could be crossed only for very serious reasons? (do we remember the film We have just to cry of Benigni and Troisi? The tax collector who asked: "Who are you? What are you wearing? How many are you? A florin!").

Whatever Trump says, I don't think that's a good idea. Also because at that time famine and disease were reaping victims, and I am convinced that it was precisely because of the misery of physical resources and knowledge imposed by this fragmentation which prevented mutual help and knowledge.

In a communication course that I attended some time ago, the teacher start her teaching saying, "When you talk to someone, remind yourself: his (or her) difference is your wealth."

This concept is central. Through the differences between people we discover new ways of looking at things. And every time we discover something, the horizons widen, improving ourselves and those around us. Expanding ours ability and those of our neighbor.

So I think: travel is welcome, as an increasingly connected world, and trade with everyone. But ... we need to be ready!

In 2015 a person, such Bill Gates, in one of his exposure to TED said to be convinced that the greatest risk to humanity is the possibility of a pandemic. On that occasion Bill Gates proposed to organize the world with a model health care which can react quickly around the world to counter effectively an epidemic. And he concluded his speech saying "if we start (to prepare) now, we can be ready for the next epidemic".

We didn't prepare. And now we pay the consequences, in economic terms and, above all, of lost of lives.

From all this, will we be able to learn?

To finish: how do we get out? More than ever with a common effort. It is necessary pool the resources of the different countries to bring them together where they are needed more. I hear of people getting upset because they think that tampons product in Italy were supplied to the USA. But, in turn, we Italians, did not scruple to buy sanitary ventilation systems from Germany. An so? I insist, it is not by closing ourselves in our shield that we will come out without harm. Well do the European Union if really it is going to organize a reserve of sanitary materials to be used in countries with greater needs.