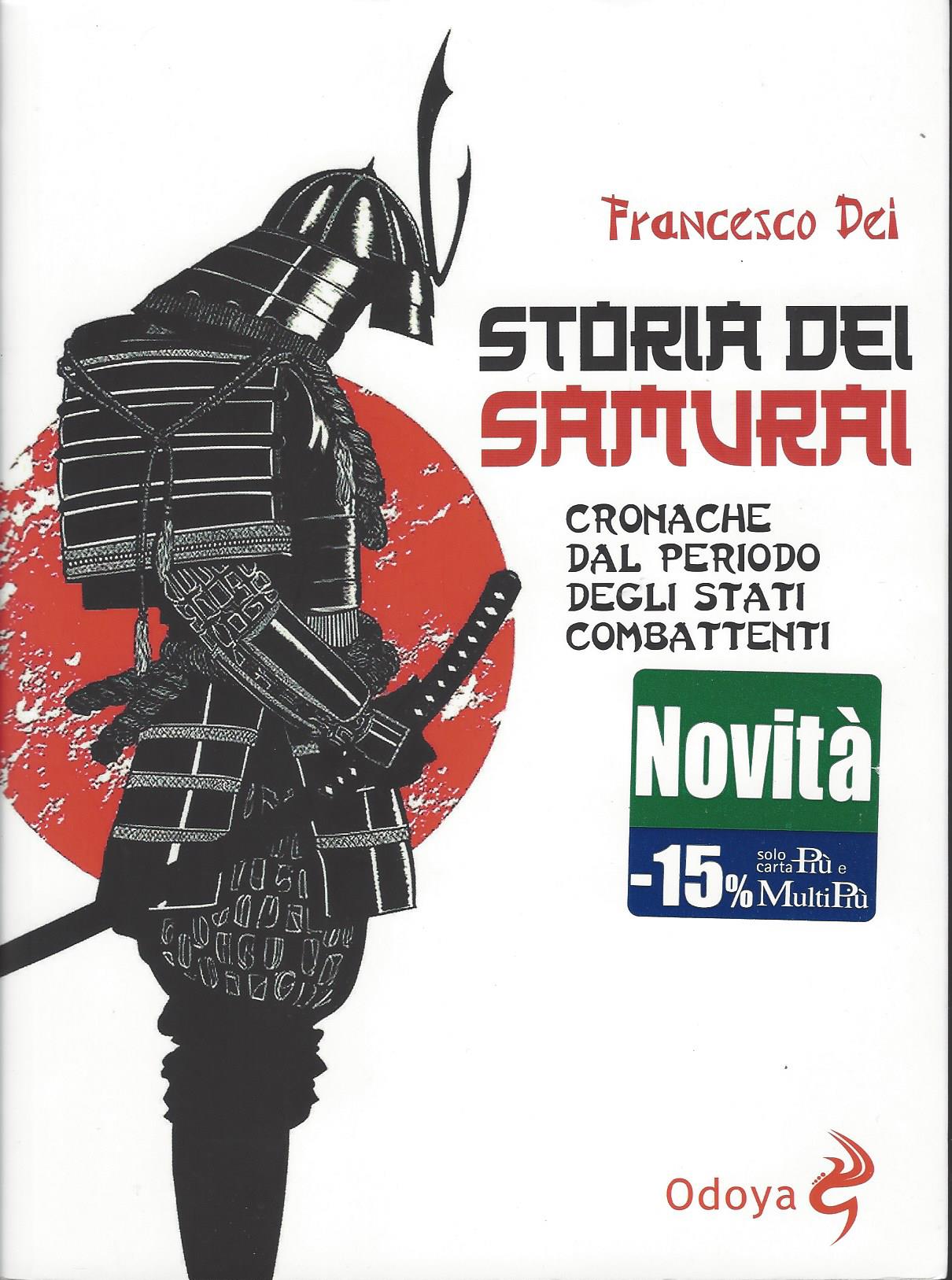 I read the essay Storia dei samurai by Francesco Dei. In this article I report my impressions.

It starts by analyzing the historical and social evolution that led at the beginning of the 16th century to the establishment of Japanese feudalism.

In practice, Japan found itself divided into about 250 independent seigniories, of which about thirty with significant dimensions and war capacity. While the central authorities, ie the emperor and the shogun [1], had no possibility to directly influence the historical events in progress.

From the mid-sixteenth century, until 1615, these seigniories became independent entities with political and economic policies, sanctioning the definitive decadence of the figure of the emperor and his court [2], and giving life to a kaleidoscopic intertwining of political and military activities. Activities aimed at acquiring more power by a lordship, at the expense of their weaker neighbors.

It is on this period that the attention of the essay is concentrated, studying the main historical events that see the succession of various foundamental figures of the the Japanese medieval history.

Initially Oda Nobunaga [3] dominates the political scene, first succeeding to undermine the power of the rival clan Imagawa, and protecting the rickety clan Tokugawa, making his lord Tokugawa Ieyasu his own faithful ally. Then opposing the power of a now-declining shogun.

In this period we observe the parable of Takeda Shingen, a veteran of small but bitter battles for the strengthening of his lordship. To counter Oda Nabunaga, Shingen successfully attacks Tokugawa Ieyasu.

Shingen died in May 1573. His son Katsuyori, eager to follow the father's victorious footprints, exposes itself too much with its aggressive military activity towards Tokugawa Ieyasu. On 28 June 1575 Takeda Katsuyori is defeated by Tokugawa Ieyasu in the battle of Nagashino [4]. The defeat has such proportions, that the Takeda clan did not recover. While continuing to defend his own territory, Takeda are no longer able to counteract the expansion of Oda Nobunaga.

But Nobunaga is knocked down by the betrayal of one of his vassals: Akeki Mitsushide. This, on June 21th 1582, knowing that Nobunaga was in Kyōto, defended only by a small escort, attacks and destroys with his own contingent the Honno-ji temple in which Nobunaga resides temporarily.

The betrayal of Mitsushide triggers the rise to power of the principal commander of Nobunaga: Toyotomi Hideyoshi. This exceptional general in less than two weeks disengages himself from the campaign he had in place, then he reaches and destroys completely the troops of Mitsushide.

After that he confronts the other Nobunaga advisers, succeeding for two years to hold on them militarily. Until, in the spring of 1584, Tokugawa Ieyasu arises aginst him.

Ieyasu has spent these two years weaving alliances with his neighbors to strengthen his position before the fight against the successor of Nobunaga.

In 1584 it is now clear that Hideyoshi prevailed over his antagonists. To this point Ieyasu breaks the delay to start military activities against him.

The following campaign ends after a year with a stalemate: Ieyasu wins some battles, but don't destroy the military strength of Hideyoshi. On the contrary, this is still firmly in command and has a capacity war that Ieyasu decides not to continue to challenge.

A truce in arms is reached between the parties. Truce cleverly exploited by Hideyoshi to undermine Ieyasu's alliances. The latter, faithful to the motto "if you can not beat an enemy, ally with him", is forced to recognize his predominance.

In the next five years, Hideyoshi, reasonably sure he is not attacked by Ieyasu, the most feared antagonist, dedicates himself to a series of military campaigns against the clans who can still aspire to cultivate ideas of independence.

But, very cleverly, he carries these campaigns by delegating them to its allies. In this way it keeps them engaged financially and militarily. And, granting the due awards when the campaigns are concluded victoriously, he reinforces the loyalty constraints.

At the end of 1590, Hideyoshi can claim to have completed that unification path of Japan, undertaken twenty years earlier by Nobunaga.

Two years later, in 1592, Hideyoshi launches the first campaign of conquest outside of Japan, invading Korea.

Initially victorious, the Japanese troops after a year of war are contained from the Koreans, helped by the Chinese empire. A long period of negotiations follows, interrupted again from the rebirth of the war in 1597.

But in September 1598, while the Japanese samurai overwhelm the Chinese and Korean troops, Hideyoshi dies of illness.

He leaves as a heir a very young son: Toyotomi Hideyori. And in his last will nominate Tokugawa Ieyasu keeper of Hideyori, together with a regency council, composed of five councilors.

As expected, in a few years the situation degenerates leading to war the factions pros and cons Tokugawa Ieyasu, considered a usurper by the loyalists of the council of regency.

The military campaign starts in 1600, to culminate on October 21th, 1600 at the Battle of Sekigahara.

In this battle, marked by the introduction of new military technologies [5], and by the careful use of political strategy [6], Ieyasu gets a suffered, but overwhelming, victory.

In the following years Ieyasu strengthened his alliances and asked the emperor to recognize his descendants from the shogun family Minamoto [7].

On 24 March 1603 the emperor appointed Tokugawa Ieyasu to the office of shogun. It is the beginning of an age of 250 years, during which the shogunate of the Tokugawa keeps united Japan, and isolates it from the rest of the world.

Reading this essay, I had an hard affair.

In fact, I am just wandering in remembering the dates and the names. Imagine then with what ease I can remember the Japanese names that occur pressing in the medieval history object of this essay.

I must honor the author, who knew how to frame this complicated matter by putting it, linearly enough, on paper.

Of course, here and there the situation gets tangled. But objectively in the midst of this crossing of alliances, arranged marriages, battles, betrayals that are incessant after a few years or, even, of months, I challenge the reader to do better!

I must confess that when I saw this essay in the library, I was pushed to the purchase from the curiosity to cross the facts told in the scenario in a couple of historical novels I read [8], respect what it is really happened.

The setting of the predicted novels was accurate. But what struck me the most was the speed with which the historical events took place. In less than fifty years Japan has gone from a plethora of feudal little states, to one single state strongly controlled by a central charge, the shogunate.

Central charge that for more than two centuries then dictated the guidelines for the whole nation.

It seemed to me to relive, amplified and with due differences, the Italian Risorgimento!

Returning to the essay. Prose is simple and straightforward, thus helping to follow a situation objectively complex.

Moreover, the introductory and conclusive historical analysis of the essay are simple but not simplistic. Analysis that succinctly examine the historical periods before and following the fifty-year period of the main dissertation.

Overall, an essay that can be interesting for those who nurture curiosity about the history of Japan.

If I had to suggest any changes to the author, I would suggest: